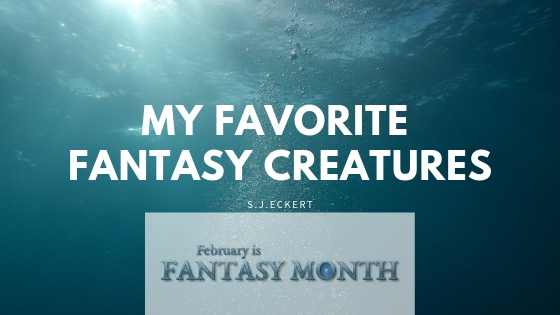 Okay, so I know I posted already this week (yay, cover reveal!), but I don’t want to skip Friday’s post! So in the spirit of Fantasy Month, I decided I would discuss some of my favorite fantasy creatures and maybe find out some of yours!

Yes. Werewolves. And all other types of were-creatures. I know they’re one of the cliche fantasy creatures, but they fascinate me, the way there’s the instinct of a beast at war with the logic of a human. And then the mythology that authors build into those worlds is awesome!

Kind of like werewolves, but what I like about shifters is that they’re a little less common… and they can have all kinds of origins. Like Patricia Briggs’s Mercy Thompson, who is a coyote shifter based on her heritage. And then there are all kinds of fae who can change shape. And these kinds of shapeshifters, unlike were-creatures, don’t show up in much fiction.

A few years ago, I would never have said anything special about mermaids. But for some reason, they have attracted me greatly in the past few years. I’ve read several books and series, and I just love the idea of creatures who live in the ocean, who can blend in with humans (in some cases), and the unique trials that accompany many of the mythologies. Perhaps I have the TV show H2O to blame, because that was my first foray into mermaid fiction… and I still re-watch it regularly. In fact, it may be about time for another round…

Okay, did you really expect me not to have this on the list? I mean, I am releasing a book all about genies and djinn in April…

I love the mythology about djinn and genies, and after the research I had done for the book, I learned so much about how it influenced mythology of creatures like ghouls (ghul) and how it has changed over time and place. The elemental aspect to different kinds of djinn is fascinating to me as well (I probably have Avatar: The Last Airbender to thank for that).

And then there’s the fact that there really aren’t that many djinn/genie books out there. To me, it still feels refreshing and new, something not overdone.

I want to mention that while I love most kinds of fantasy creatures, there are also those I don’t like… particularly vampires. There’s just something about them I can’t stand. And while I personally believe in angels and demons, I do not appreciate them in fiction and would rather not read about them. So I suppose those are my two fantasy creature dealbreakers.

But I’m curious what other creatures I may not have thought about. I have considered zombies, unicorns, kelpies, and other types of fae, but I know there are way more things out there.

So what are your favorite fantasy creatures? What creatures are your fiction dealbreakers? Tell me below, I want to hear about all the creatures!