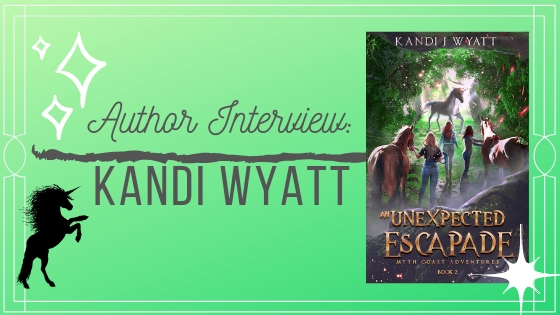 Not so long ago, we had author Kandi Wyatt over for the cover reveal of her new fantasy adventure, An Unexpected Escapade. Now, we have her back to celebrate that same book’s release with an author interview! (PS, it releases today!!!)

Without further ado, here is my conversation with Kandi! (responses have not been edited)

1. Welcome! We’re so glad to have you back again! Would you mind telling us a little bit about yourself and your writing journey? When did you start? When did you decide you wanted to publish?

So glad to be here. I’m a wife, mom of five, teacher, author, artist, and photographer’s assistant. To say I’m busy is an understatement. I’m down to only one child at home, and he’s seventeen. The rest are out on their own.

I’ve enjoyed writing ever since I was in high school, but being a mom, I didn’t have a ton of time to sit down and write. I read when I could and had other hobbies, but in 2006, after reading a young adult book by Timothy Zahn, I followed through with the discussion questions at the back of the book, and created a world of squirrel-like creatures and a little girl who was washed ashore. I wrote it for my kids, with the main character being patterned after my daughter. Another three years went by before I picked up another story.

On a family vacation my daughter jokingly said she’d been misnamed. She’s not a morning person, and her name’s Dawnya. I asked if she should be called Duskya instead. Several miles further down the road, we passed Three Mile Canyon Rd. I envisioned a dragon spewing fire down a box canyon. From that humble beginning flowed Dragon’s Future and the Dragon Courage series. Between December and July, I wrote four and a half of the six books. Then the muse went silent. I had said I’d not force the stories, so turned to drawing characters and scenes.

Fast-forward to 2015, my kids were now much older—one out of the house and three in high school. The middle son won a scholarship to a writer’s conference. I attended with him and my youngest daughter. While there, one of the presenters stated that her publishing company was accepting submissions. I immediately thought of Dragon’s Future. Returning home, I debated and debated acting upon the information. Finally, I hit submit without telling a soul. Three weeks later, I had to let people know and make another decision—should I publish it?

Upon careful consideration and discussion with family and other authors, I decided to publish. A year later, I had four books published and was working on the fifth, when the publishing company went out of business. That was another turning point in my career. I had the option of quitting or continuing as an indie or finding another publishing house. My choice seemed clear to me since I wanted control over my books. So, without any disruption in my publishing schedule, I went indie in June, 2016.

2. Is there anything in particular that often inspires you?

When I first started writing, it was my kids and students, but now more of my newer stories have been inspired by my husband. He’s asked “What if?” and posed ideas for a whole knew world. We also work together in creating photographs that tell a story. I’ve used several of those to write stories.

3. Do you have any favorite topics or themes to write about? What about to read?

I write about what interests me, but also what’s important. Many of my themes come from spiritual truths found in the Bible, even though they may be cloaked with fantasy themes or characters.

I love reading sci-fi and fantasy. Historical fiction, if well done, also is a favorite.

4. This new release sounds like a blast! What gave you the idea to write a unicorn-based story?

The bigger question is why did it take me this long to write a unicorn story. I loved unicorns from middle school and through high school, but then my husband introduced me to dragon stories. So, those are what came out first.

This trilogy is based on real-life. The town of Myrtle Beach, Oregon, isn’t based on Myrtle Beach, Virginia. It’s actually a blend of two town names in my area—Myrtle Point and Gold Beach. Several of my students inspired the main characters. While I was writing book 1, I had in mind book 2, but a student came up to me and said, “Señora, you should write a book about girls, horses, and the ocean.” She didn’t realize I already had in mind a story about girls, horses, and a unicorn with her as inspiration for one of the main characters.

Since book 1 had a dragon, I thought a unicorn would blend in well with horses. I wanted each book of the trilogy to have a different mythological creature. Little did I realize that the idea for book 3 would morph to include many beings from myth.

5. Did you have any favorite or least favorite parts to write?

Actually, yes. Book 2 took over a year to write as I tried to process my grief for the student who asked me to write the story. She lost both parents over the course of one year. In some ways she appeared to handle it better than I did! I didn’t know what I should do with the characters in the book—should I have them go through the same thing she did in real life, or should I change things? In the end, after a year of trying to write, I was able to sit down and keep some of the same things as the real-life person and adapting them to fit the story.

I loved how the character Will came about though. His character grew from book 1 to book 2 based on my own understanding of the student who inspired him. The quiet, steady personality of Will was what I saw in my student. I’m glad he became Ana’s friend and confidante.

6. Any hints about upcoming projects?

Oh, wow! There are several, and if characters don’t be quiet the stories might not come out in the order they’re supposed to. I’m doing edits for book 3 which is to release in September.

Then the goal was to have an Ancient Egypt Biblical retelling trilogy ready for next January. I’m writing book 2 right now, but another story kind of took over this week. I thought it was a short story, but it’s all ready over 6,000 words.

I also plan to return to the world of Dragon Courage with a trilogy based in the Carr, one of the sections of that realm.

The short story very possibly will be a three story novella either published as three separates or joined into one long book. It looks like it’ll be the first in a new world inspired by my husband’s “what if” question.

The best thing I can say for aspiring authors is to stay true to you, keep writing, and gather a team who has the same vision you do. I love working with my team. They make the journey so much better.

Thank you for reading. Tosca Lee, author of The Line Between, said that there are three people who make a book—the author, God, and the reader. This is so true. The reader brings their own experiences into the reading and the story is all the richer for it. I hope you enjoy Myth Coast Adventures. I can’t wait for readers to see the conclusion.

An Unexpected Escapade is out now! You can grab your copy here. And be sure to check out Amazon and Goodreads for more books by Kandi!

Even as a young girl, Kandi J Wyatt had a knack for words. She loved to read them, even if it was on a shampoo bottle! By high school Kandi had learned to put words together on paper to create stories for those she loved. Nowadays, she writes for her kids, whether that’s her own five or the hundreds of students she’s been lucky to teach. When Kandi’s not spinning words to create stories, she’s using them to teach students about Spanish, life, and leadership.

Kandi notified us of an issue with her pre-orders on 16 April 2019. If you pre-ordered, Amazon mistakenly sent out the ARC version of the manuscript, instead of the final. To fix this, please go to your Content and Devices under your Amazon account and click Update Content. She apologizes for the confusion and mixups, but this is a quick fix to make sure you have the correct, final version!