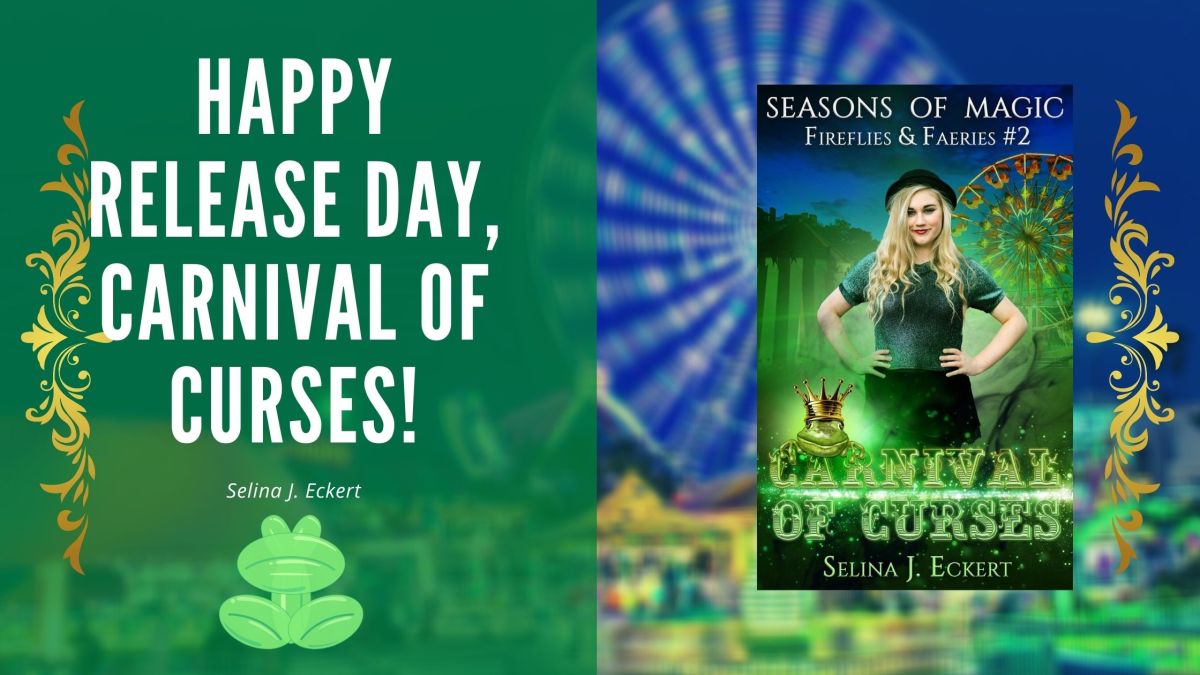 Last week I shared some end of summer favorite books, and today I’m sharing my very own summer story! Since we’ve been sorely lacking on fair season this year, I’ve written a dark carnival novella for the next Seasons of Magic installment, Carnival of Curses! It came out yesterday, but I wanted to take this week’s blog post to really spotlight it. I’m so proud of this story, and I think you will enjoy it as well!

Here’s a little more about it:

Nell should have known better: kissing frogs will only get you cursed.

High school senior Nell is a pro at hiding what she wants, from her college plans to her feelings. She’s so used to her own lies that she thinks nothing of the one she tells the green boy at the county fair’s kissing booth. But a lie to the green boy is meant to ensnare humans just like her—and trap them in the Fae circus master’s carnival forever.

Alone and forgotten by everyone she knew, Nell has no choice but to find her place in this dangerous, magical new world. But the carnival is more than it seems, and the curse has ensnared many more than just Nell. With time running out before the carnival moves on, can Nell bring them all together to fight back against the dark magic of the Fae?

Or will Nell and her new friends serve the Fae forever?

Carnival of Curses is part of a standalone series of novellas, Seasons of Magic. If you like found family, dark carnivals, and seasonal tales, then you’ll love Selina J. Eckert’s mysterious frog prince retelling. Grab your copy to leap into dangerous performances and fatal secrets today!

You can get a copy on Amazon or other major retailers!

And since you’re here… how about an excerpt???

Nell clapped and cheered from her place in the bleachers as a line of high school students leading goats paraded through the arena. Kirsty was near the middle, holding a shining silver collar around the neck of a Nubian goat. It was black with white spots, and its long ears flopped with every step.

The line of students stretched from one end of the arena to the other, coming to a stop as they spread out evenly, and each handler raised their goat to a table for the judges to observe. The three judges, ribbons that identified them pinned to their chests, began evaluating the entrants on clipboards.

Mid-clap, Nell froze, and the applause faded from around her. She turned her left hand over and stared at the back. Was her skin… green?

“Hey, Nell!” Sam flopped down on the bleachers next to her. “What did I miss?”

She quickly covered the green spot with her right hand, heart pounding. “They just started. You only missed the parade.”

Sam nodded and started cheering as the judges approached Kirsty, but Nell couldn’t focus. The green was so similar to the color of the green boy’s skin… could he have had something to do with it? Was whatever he had contagious?

The rest of the competition passed in a blur, and she barely even noticed when Kirsty took second place, even when she stood with Sam and cheered along with him.

They met with Kirsty afterwards, and Nell forced herself to smile at her friend. “Congrats, girl! Though you totally should have taken first.”

“Thanks!” Kirsty beamed at them, holding up her red ribbon. Her smile faded, and she cocked her head at Nell. “Everything okay?”

Nell shoved her hands in her pockets, forcing a stiff, wooden smile. “Yeah, of course! Just happy for you.”

Sam leaned closer to her. “Are you sure? You look a little… green. Are you feeling sick?”

A wave of cold washed over her. She looked green? Like, not just her hand?

“I’m fine. Listen, I’m gonna run to the bathroom. Meet you guys by the Ferris wheel?”

She ran off before either of them could answer, imagining their bewildered faces behind her. She rushed past the line of women waiting to get into the fancy, air-conditioned restroom, ignoring the disgruntled grumbles and shouts after her. She slid to a stop in front of a mirror, peering at her reflection.

Green. She was turning green.

It had to be the green boy’s fault. What else could it be? He realized she wasn’t going to help him, whatever it was that was wrong, and he cursed her. It was the only explanation.

She had to get him to remove it.

She whirled from the mirror and shoved past the line again, amid more shouts and angry shoves. But there was no time for them, no time for muttered apologies. There was a week left in the fair, and if she couldn’t get the boy to fix her now, she didn’t have much time to find a solution. How many stories had she heard? Wasn’t it true that most curses needed to be broken by the curse-maker? Or a true love’s kiss. But she wasn’t sure she even had one of those.

She pushed her way through the crowd in the direction of the kissing booth, ignoring the spinning lights and tinny music that only seemed to be mocking her now, telling her she was turning into a carnival freak.

She burst through the last line of laughing faces and stumbled to a stop in front of the kissing booth. The boy had been slumped behind the counter, hand propping up his chin, but he straightened when she appeared, smiling coldly.

“Well, well,” he said. “Back to reconsider?” She slammed her hands on the counter and leaned forward. “What did you do to me?”

Thanks for reading, and I hope you enjoy Carnival of Curses!

Get your copy: Amazon ~ Other retailers