Are there certain types of tropes that just bug you? Here are a few related to mental illness that I can’t stand! 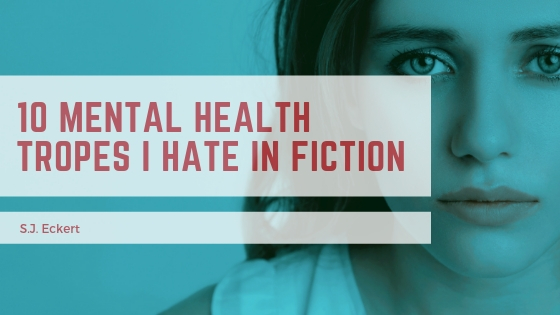 For a ridiculously long time, there has been a large back-and-forth between the societal stigma of mental illness and the progress science, and society, has made in understanding and treating these illnesses. This stigma and the views of society are often apparent in fictional depictions of mental health and mental illness. And, honestly, they’re usually at the best not very good and at the worst downright dangerous and harmful. And this is coming from a girl who loves to read books with mental health elements to them! So today I want to talk a little about some of the tropes surrounding mental health that I just cannot stand.

There may be some tough topics ahead, and you may not agree with all my points. But hang on, friends. This is a long one.

This just irks me, mostly because when it is used, a lot of the time it is simply because the character doing the labeling (like an ex-boyfriend) is making an excuse for the horrendous behavior that led the person to their so-called “crazy” behavior. Or, it is used as an excuse to disregard a person’s feelings and opinions. OR it is reducing a person or a character to someone else’s flawed idea that is mostly just a smokescreen for that other person’s flawed ideas.

And sadly, this happens in real life, too. We can do so much better, people.

2. People with mental illness are dangerous.

OH MY WORD I cannot stand this one. And it’s current! I just saw Bird Box on Netflix this week, and boy, does it hold onto this one!

POSSIBLE SPOILER ALERT! (Skip this paragraph if you haven’t seen the movie yet) In the movie, there are “criminally insane” people from an asylum who escaped after everything started going downhill for the world. And these people don’t kill themselves after seeing the creatures, like most people do; instead, they force other people to look at them, leading these other people to kill themselves. And if you don’t willingly look, they force you to. Violently.

Yes, this disorder gets its own bullet-point.

Dissociative Identity Disorder (DID), formerly known as multiple personality disorder, is often used in fiction to create either dangerous characters (see Point 2) or quirky, multifaceted characters. The alters (personalities) are often portrayed as just good folks in need of acceptance.

But like so many mental health scenarios in fiction, this is wrong. DID is a complex and serious disorder requiring a properly trained and competent therapist to help integrate the alters. Accepting the alters as they are shouldn’t be the goal of therapy or of the person suffering from the disorder. But instead of this, a lot of fiction writers exploit this disorder to perpetuate a harmful idea that alters can be good, or to make their character more interesting.

Oh, you want the long version? Okay, let me explain. So there’s this romanticized notion that to be an intelligent or artistic person, you must be a “tortured soul,” aka suffer from some sort of mental illness. But this is yet another myth perpetuated by fiction.

Here’s the facts: people with mental illness typically find that the illness interferes with their ability to think clearly and create. In fact, I can personally attest to this.

You see, a few years back, I suffered from a pretty serious bout of depression, which I had experienced to a slightly lesser degree on and off for years and years before that. Before the depressive episode hit, I was writing thousands of words per day, and I even completed two full-length novel drafts within only a few months. And when the depression hit, I went to school, then came home and sat on the couch until 3-4 in the morning doing nothing other than watching TV. I couldn’t create. I wasn’t more creative or thoughtful or intelligent. I was stagnant and unmotivated and self-depracating. It killed my ability to live to my potential. And for a lot of people with depression, they don’t even survive to come out the other side like I did.

5. The weird, dangerous, or unethical therapist.

*sigh* Okay. So fiction seems to mostly have two options for treatment of mental illness by a mental health professional: no help (which is Point 6) or help by a therapist who is weird, dangerous, or unethical.

“Weird” therapists are those who seem spacey or are bumbling, fumbling idiots. It makes therapists seem aloof and distant, when in reality, a good therapist is attentive, down-to-earth, and easy to talk to.

But what I personally find even more alarming are the portrayals of therapists who do things that are unethical and, quite frankly, dangerous. They experiment on their clients or patients. They torture them. They form relationships with them that step beyond the appropriate professional relationship. It bothers me.

And why do I hate these so much? Because they scare people by painting an image of a horror movie or ridiculous scenario every time someone suggests therapy. And it can keep people from seeking the help they need. And that is dangerous to their well-being.

6. There are no therapists.

On the other end of the spectrum are the stories where mental illness runs rampant and unchecked or there is never anything to address traumatic experiences. These are the stories where the kid watches his parents die, but no one bothers to consider how that might impact him emotionally or psychologically. Or the girl going through a manic episode just keeps getting worse because no one seems to notice. The reality of life with mental issues and illnesses is ignored in favor of drama. And that is also not okay. I see it spreading a message of hopelessness and feelings of being unnoticed and unimportant. We need more realistic pictures of therapy across the board.

This is another pet peeve of mine. Writers will take a person, decide they’re too bland or uninteresting, and give them a mental illness, like OCD, to make them more interesting or quirky. Or their character is too perfect, so to give them a flaw, they give them severe and crippling anxiety.

Now, it’s perfectly fine to write characters with mental illness (and in fact there should be plenty of them, since so many people experience them). But what’s not okay is using them as a sideshow for the story. The illness needs to be purposeful and sensitive, and it shouldn’t be used for comedy or to imply that having a mental illness makes a person flawed. There are so many other flaws out there that mental illness shouldn’t be used as one of them.

8. Mental illness can be overcome by trying just a little bit harder.

This one also angers me from my experience. I can’t tell you how many people told me, when I was going through my worst, to “just be happy,” or “get over it,” or “pray more.” Like I wasn’t trying hard enough to get through my problem. Like it was somehow my fault. And unfortunately, this societal attitude carries right through to fiction.

There are so many stories out there where one character will tell another to just pull themselves up by the bootstraps and get over it… and they did. And that is completely unrealistic.

And this trope is harmful, because it implies to people experiencing mental illness that it’s their own fault and their own shortcoming that is causing them to suffer.

And that’s so very much not true. Mental illness is like physical illness; even the brain can get sick. Do you tell a person with the flu to just get over it? What about someone with meningitis? No! You take them to a doctor and tell them to let you know if they need anything. And that is how it should be for mental illness, too!

9. Taking a pill immediately fixes everything.

There’s another trope where a person suffering from a mental illness will take a single pill or have a startling revelation and suddenly everything is fine. It’s the idea that a single quick fix can change that person’s state immediately.

That is not how it works.

Some medications take weeks to start working, and they work better when a person also talks to a mental health professional. It takes time. And it’s not a straight process; there are ups and downs, relapses and recoveries. It’s hard work. It’s not just a simple fix of “take this pill and everything will be great!” And every illness, and every medication, has different timelines and effects and side effects. And none of them is that easy.

10. Suicide: romanticizing or using for revenge.

We’ve finally made it to the last one. And this one is the heaviest, and the one I considered not including.

Suicide is never to be taken lightly. It’s not a joke, it’s not something you just casually throw in. And many fiction writers talk about it in ways that can make it seem appealing, like and escape or a way out, especially to people who are struggling with just living life.

And then there is the idea of using suicide as a way to get back at someone. Looking at you, Thirteen Reasons Why! These tropes suggest that suicide is a viable way out, a good way to get the last word. But it’s not. Because the person who dies is still gone. And they leave broken hearts and broken friends and families behind them. Every single one. So let’s stop making it into something pleasant and positive when it’s not.

I know this was quite a long post today, but mental health is something I am very passionate about, and seeing these destructive tropes in my fiction burns me up! Let’s do better, as writers and readers, to create and demand realistic fiction that doesn’t make light of mental illness, make it a joke, or perpetuate harmful stigmas. Let’s make it something for people to understand and relate to. We need to do better, for ourselves, for society, and for people suffering from mental illness.

And if you are struggling in any way, with anything at all, please consider talking to your doctor or a mental health professional. There are so many options available to you, and help is out there, waiting! There is hope. You can visit To Write Love on Her Arms, the National Suicide Hotline, or a variety of other sites all designed to help you get through the bumps and deep valleys of your life. Please use them, reach out, and take those steps.

I said a lot today, but I also want to hear from you! What are your least favorite (or favorite) tropes related to mental health? Tell me in the comments!