Why are we so drawn to series? 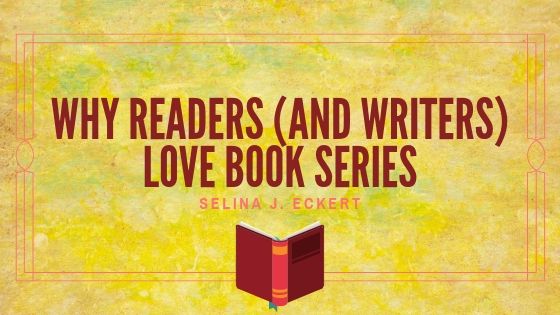 It’s no secret: there are TONS of book series out there. And for a lot of people, that’s a great thing!

But why is it that readers love series so much?

This week, let’s explore the popularity of book series, as well as a few publishing models that play into the motivations for a series. Then, in the next couple of weeks, I’ll discuss some of my favorite completed (or not) series!

Be sure to hop down to the comments and let me know if you agree or disagree with any of my points. Or, if you absolutely hate series, let’s talk about that, too!

What makes book series so popular?

Now, this isn’t a how-to. I’m not here to tell you how to rocket your book series to the top of bestseller lists. Honestly, I don’t know . And that’s a completely different post. But I do want to explore a couple of characteristics of series that make them so popular.

This week I actually got to a very apropos video on YouTube that talks about learning curves in books. You see, I’ve been watching Brandon Sanderson’s lectures on science fiction and fantasy writing (just search for Camera Panda and Brandon Sanderson on YouTube), and this video in particular discusses worldbuilding, one aspect of a book that readers need to learn to understand a story.

And the thing is, particularly in fantasy, there is a STEEP learning curve for readers. There are new terms to decode, an entire world and culture to understand, and characters to get to know. Sometimes, often depending on the age category, the learning curve is shallow and you get to learn things slowly. But other times, the author will throw everything at you very quickly.

The thing is, once you’ve learned what you need to understand the world and the story, you can just enjoy the book without having to learn more details that set the stage. You can put your reading on cruise control, and you can start to guess and extrapolate what’s going on!

But if the book is a standalone, that may mean you don’t get much time to really savor all your newfound knowledge.

In a series, much of the learning curve is set up and established in book one. After that, readers can enjoy the rest of the stories without having to start all over! And that is one great appeal of a series. No more origin stories after book one!

Here’s another not-secret: our society loves binging on entertainment. Usually that’s in the form of streaming TV shows, but it’s extended into the literary world as well.

Series provide great ways to make episodic installments into a group of characters and a world. This happens a lot with urban fantasy, where a plucky hero/heroine fights different creatures in a (mostly) self-contained story every book. Each book feels fresh, but we know the people in the story and already love (or hate) them, and we’re invested in their adventures. We also get the chance to see them grow and develop as their new adventures force them to confront new things.

Traditional publishing can be slow, and it may take a long time for these books to come out (one per year or less). I’ve heard many, many people complain about books not releasing fast enough (particularly after all of the Game of Thrones delays). Some readers even go so far as to refuse to buy an author’s books until the entire series has been released. (Pro tip: don’t do this, please. I know it can be frustrating, but if not enough people buy the book(s), there will NEVER be an end to the series. Once it stops being profitable to the author/publisher, they may drop it, and it will stay incomplete forever.)

But some publishers, particularly indie authors, have embraced binge culture with the rapid release model. In this model, authors will write several books or an entire series, then release them in quick succession, usually within a few weeks to a month of each other. It keeps the buzz going on the story, satisfies binge readers, and can be more profitable for the author in the long run.

Other indie authors have taken advantage of this mindset by releasing smaller, bite-sized stories in serial. This allows them to publish fast and follow an episodic model of storytelling. I’m specifically thinking of stories like Coffee and Ghosts by Charity Tahmaseb and my own Seasons of Magic stories (though those are not connected; each is a standalone). Readers can read these stories much like they would watch a TV show: in short, rapid-release episodes that follow a Hollywood model of storytelling (same characters, but each season follows a different major arc, and individual episodes address part or none of the overall arc). They can also be anthology series that explore a different shorter story each episode (if I could remember that one on Netflix, I’d share it…).

And finally, let’s not forget the biggest reason that readers and writers love series: it allows them to spend more time in a world they love. Writers spend a ton of time with their characters and building their worlds, and sometimes we just fall in love. Readers also grow attached to the worlds we build, and every chance to read a new adventure is like catching up with an old friend.

It’s all about love.

I know not everyone is a fan of all these models. Personally, I used to hate serialized fiction, but… I get it now. I do. And I actually find it kind of fun! But there are lots of reasons (besides money) why people love series so much and why they continue to persist. I’m sure there are plenty more beyond what I discussed today!

So now it’s your turn. Do you love series? Hate them? Why? Let’s chat in the comments!