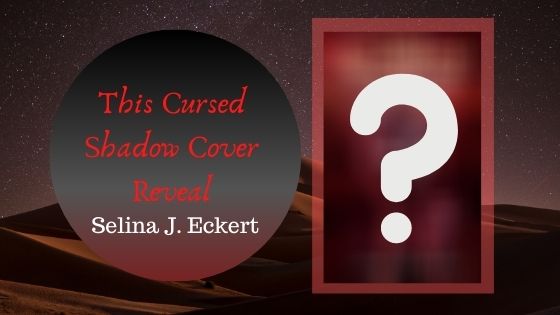 I know, I know. I’m slow. It’s been a year and a half since This Cursed Flame came out. But I really wanted to be sure I had something special for you! And believe me, it was a lot of work. I rewrote this beast from the ground up and completely changed a lot of what the story had been when I originally wrote it… 7 years ago.

I think you’re really going to like the results of this rewrite, though. Let me tell you a little more about this story.

First off, while your favorite characters from This Cursed Flame are here, they take a back seat to the new story and new characters (but don’t worry… they are back in book 3!). In This Cursed Shadow, we meet Lacey, a Jenari (part human, part djinn) with aspirations of being a magical archaeologist and finding her lost father, and Senka, a Soul Shadow Guardian, or a creature made of light and shadows tasked with protecting the citizens of the Shadow Realm.

Sometimes the darkest shadows lie within.

Senka, a Shadow made of light and dark, is finally a Guardian of the Shadow Realm, years after her parents were killed by the same deadly creatures now trapped there by the djinn. But when the creatures ambush her on one of her first days on the job, she finds herself with a fatal curse, and decaying barriers eject her from her home—threatening to release hordes of the shadow-creatures right along with her. Her only choice is to find the one person who might be able to reverse the curse and get her home in time to warn the other Shadows of the impending disaster.

Lacey, granddaughter of the great Ghadir, has been living among the humans with her brother since the Candrani revolted and plunged the Djinn Realm into chaos. When her mother, still in the Realm, suddenly stops answering Lacey’s calls, Lacey is desperate to bring her to safety. But when Lacey returns to the Realm, she finds a world far different from the one she had left years before.

Escaped shadow-creatures attack Lacey, and Senka comes to the rescue, thwarting everything Lacey had ever been taught to fear about Shadows. Then, news of a once-lost Shadow artifact reaches them—an artifact capable of leading them straight to the man who can save Senka and maybe even to Lacey’s missing father. But a power-hungry djinn official, Auretta, is determined to hide the most powerful artifacts to steal control of the Realm for herself. With time running out, can they escape Auretta in time to stop the wards from breaking?

Or will Auretta succeed in destroying everything?

So are you ready for the cover now? Let’s see it with the previous covers!

Isn’t it GORGEOUS??? Savannah over at Dragonpen Designs made another wonderful addition to this series!

You know what else is pretty great? The book will be here on December 20, and This Cursed Light (the prequel starring everyone’s favorite shapeshifting wild cat) is now FREE on all platforms!

I’m also setting This Cursed Flame at a special pre-release sale price of $1.99, so be sure to check back to see when that goes live (I’m currently waiting for the price change to be approved). It will be on sale all the way through Christmas! This is a great time for those of you who haven’t read it yet to pick it up and give it a read before TCS comes out!

Here are all the links you need (pending approval for some of them, so check back later if they don’t all work yet):

Thanks for reading this far, and we’ll chat closer to the release date about this story again. Until then, stock up on these deals, catch up, and enjoy!