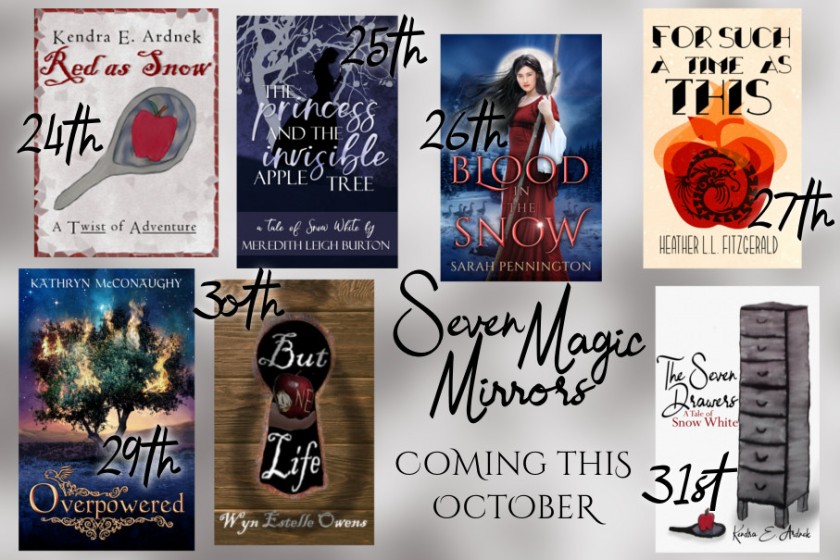 It’s that time again: another fantastic release! A while back, I had entered a Snow White retelling contest. More recently, I shared with you a couple of releases that came from that contest. And now, even more! So if you love retellings, Snow White, or anything in between, this is perfect! I had the great joy of being able to read some of these ahead of time, and I am absolutely blown away!

One of my favorites of this release is Sarah Pennington’s Blood in the Snow, an Asian-inspired retelling that combines Snow White and the Goose Girl. And seriously, this one has such beautiful language and storytelling… one of the best things I’ve read all year.

To help celebrate this release, I had a chance to talk to Sarah herself and give you an inside look at Blood in the Snow. Enjoy!

Q: Tell us a little bit about your writing journey. When did you start writing? When did you decide you wanted to publish?

Well, I’ve been telling stories to myself and others for as long as I can remember, but I started writing semi-seriously when I was about eleven or twelve. Then I did my first NaNoWriMo event in November of 2011, and I’ve had at least one story in progress at all times since then.

As for publishing: for the longest time, I fully planned to pursue traditional publishing — I even wrote a blog post about why I wasn’t going to self-publish even though I knew so many people who were doing it. I started to question that decision last January — I can’t even tell you why I suddenly wasn’t sure about my plan, only that I went from feeling very certain that I wasn’t going to self-publish to wondering if self-publishing really was the better option. Then, in April of this year, the results of the Five Poisoned Apples came out, and . . . I didn’t win. But I did achieve Special Unicorn status (which means I got a perfect score from the judge), which meant I had a cover and a story that very easily could’ve made it into the collection. That was two of my self-publishing doubts down. And since Kendra [Ardnek] was running the Magic Mirrors release, that took care of another big concern, marketing. And so, here I am.

Q: Where do you often find inspiration?

Haha, a better question is where don’t I find inspiration? A lot of my ideas come from the music I listen to (which is a very eclectic mix, just saying) or from things in books that I wish the authors would’ve explored more. But I’ve also come up with ideas through random conversations with friends, or from road signs, or just from nowhere in particular.

Q: What are your favorite themes or topics to write about?

So, I typically don’t set out to write stories about particular themes, but there definitely are themes that come up frequently in my writing. One of these themes is the idea of power: types of power, the ways people deal with power, the ways power changes people, and the responsibility and opportunities that power brings. I especially enjoy the contrast between those who seek power and those who are given power without seeking it, which is definitely something that comes up in Blood in the Snow. At the start of the story, Baili has been given a certain type of power that she’s really not sure if she should have or not, and a significant part of the story is her deciding whether or not she’s going to claim the responsibility and opportunity that power gives her or if she’s going to let those things, along with that power, slip away.

Q: What inspired Blood in the Snow? What made you choose an Asian-inspired retelling?

I originally wrote Blood in the Snow for the Rooglewood Press Five Poisoned Apples contest. I wanted to explain the villain’s obsession with being the fairest, or at least for wanting Snow White dead. I tossed a few ideas around at first, including vampire!Snow White and variations on the term “fairest” before settling on the idea of the prophecy with the help of my sister. Then I added the setting because the description of Snow White — pale skin, dark hair, and red lips — fits very well with ideals of beauty in several East Asian countries, plus I thought that an Asian-inspired setting would help set Blood in the Snow apart from some other retellings.

Q: What were your favorite and least favorite parts to write?

My favorite part of writing Blood in the Snow was, without a shadow of a doubt, writing any scene with Chouko and Gan in it. These two are fun even when they’re not in the same room, but put them together and the dialogue practically writes itself. They both have very strong, distinct personalities — they’re polar opposites in some respects, but incredibly similar in others, and that means they play off each other very well.

My least favorite part of writing Blood in the Snow was actually editing the book. The original version of Blood in the Snow was about 30,000 words long, but since I wanted to submit it to the Rooglewood Press Five Poisoned Apples contest, I had to cut it down to 20,000 words. It was a struggle, let me tell you, but building it back up when I decided to self-publish was fun.

Q: Do you have any hints for other projects coming up?

Currently, I’m working on editing Mechanical Heart, a steampunk retelling of Rapunzel featuring a powerless prince and a girl trapped in a clock tower. My goal is to have it finished in time to submit for the next Arista Challenge release, Golden Braids. Aside from that, I’m taking a good look at the novels I’ve written already and the novels I intend to write in the near future and figuring out what needs [to be] written, rewritten, or edited first.

I’d just like to offer a little encouragement from both Baili’s life and mine: sometimes, what you thought was set in stone is more malleable than you think. Sometimes, a future you thought was decided turns out to be in flux. And that’s ok, because God’s plans don’t change, and He’s the one in control. So sometimes, when things aren’t turning out the way you expected them to, the best thing you can do is to let go of your plans and look for what new adventure you’ve been given. It’s not easy (it’s definitely something I still struggle with and will probably struggle with for most of my life), but it’s worth it.

Thanks so much, Sarah, for all your inside info and that awesome piece of encouragement at the end. I’ve definitely seen similar changes to my life plans, and I love how stories can help us see we’re not the only ones. Seriously amazing story, and I’m so glad to have had you on the blog today!

Now, for you readers, I hope you have found this as fun and interesting as I have! And if any of this has piqued your interest, be sure to head over and check out the rest of the tour and the other releases in the Magic Mirrors release! PS, there’s a giveaway by five of the authors for paperbacks of their books over at that link.