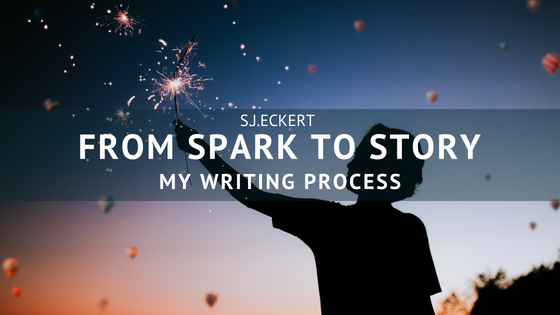 One thing I’ve always found interesting is how the development of a story can vary from author to author. Everyone eventually finds techniques and patterns that work for them, helping them to cultivate their initial idea into a finished product. Personally, my process has developed through a great deal of trial and error of different methods until I arrived at the way I approach stories now. Today, I want to share what my process looks like.

Yes, the elusive spark to a greater story.

Like many authors, I can’t really tell you where all my ideas come from; a lot of us honestly don’t know. But there are a number of things that can spark those thoughts. For me, my initial ideas have come from things like dreams, other people’s works (books, movies, magazine articles, etc.), things I’ve learned in school or through my own research, or even something as simple as a photograph, as happened with my most recent idea. But that’s all it takes: one simple moment of “that could be an interesting story.”

After I get that idea, it simmers on the burner for a while, building up some flavor. Okay, metaphors aside, after I have an idea, I sit with it and simply think about it. This simmering phase can be anywhere from days to weeks to months long before I’m ready to move on to the next phase. I let the idea build until I know where I want to start.

Once I have an idea and I’ve given it some thought, I pick a fresh, brand-new notebook. I have a separate notebook for every project, one that I love to pick up and open. Sometimes I’ll even match the look of the notebook to the aesthetic I see in my head. And I also keep a small library of blank notebooks for the sudden idea I MUST write down immediately. Those can be unpredictable, and I need to be ready!

Then, the research begins. I start my notebook with research on what exists in our world that relates to the story. To keep with the theme of my most recent idea (which is currently in this phase and the next two phases), this was when I sat down and researched the picture that sparked it all, a photograph in a unique setting. So I looked up information about that setting, its geology, its geography, the earth science behind it, the flora and fauna associated with it. I learned everything I could and let that build on the ideas I already had.

In this phase, I also tend to make a board on Pinterest to help me envision what is to come, the Build. I save pictures for anything that could relate to the story, real or fantasy, any character inspirations, setting inspirations, or aesthetics to help me feel how the world feels, to achieve the emotion I want to achieve, to visualize the things I need to create.

Then I take it further.

I move past the real and into my own creation. I begin the worldbuilding stage. I get to know what my world looks like from the layout of the country to the ecosystems to the culture. I write down everything I can think of to build the setting for the story. This naturally leads to filling in other details, such as characters. In this stage I complete (or set up a solid foundation for) the setting and the major characters I need to start the story, any details I want to include, what makes it unique. And I fill all this information into my notebook.

Note: sometimes the characters come first. Some of my story sparks are a character, and I build out from there. Every story is different. But the general process remains the same, even if the specific parts change and rotate.

Then I let the story simmer again. This phase could last anywhere from minutes to weeks to months, depending on how the previous phases went. This is where I need to take the build I created and turn it into a story. What is going on in the world that could create an interesting tale? What are the characters facing? Where is the story in the place I found? With these people I met? I ask myself these questions, write down the possibilities, and let them sit in my brain as more ideas.

After I brainstorm the direction I want to go (which can happen all at once or in stages), I generally sit down and write a basic outline for the story. (Side note: I tried to pants one of my books…write it without an outline or any clear direction…and have decided to never put myself through that again! The editing has been a monster.) This helps me find my story beats, lay out the map for the story, and understand where everything is going before I begin. Sometimes, after that basic outline, I will fill in more detail, such as chapter by chapter, but this doesn’t always happen.

Finally, I’m ready to draft. And this is my favorite part! I tell the story.

I typically write in a dedicated word processor. Previously, I used Word, and I tried Scrivener, but it didn’t benefit me much. Now, I do most of my drafting on Google Docs so I can open it anywhere and on any of my devices. I wait to convert to Word until I’m ready to share it. This may change in the future as my circumstances change, but I doubt it would deviate much from this basic setup. I prefer to type my stories directly in manuscript submission formatting.

After I complete my first draft, which has historically taken me anywhere from a few months to years to complete (depending on how dedicated I was at the time of the writing, how motivated I was, or my health and life circumstances), I am ready to fix the problems.

First I let it sit for at least a month before touching it again. I want to forget what I wrote so I can look at it with fresh eyes.

Then, I read through the entire thing, changing nothing and keeping minimal notes, just to get a feel for how the story flows, feels, and accomplishes what I want it to accomplish.

Then, I do the first rewrite. A brand new, fresh document, where I write the story over again. I use some of the first draft, but the story typically morphs and changes along the way, so many of the scenes, especially early, also change.

Then comes more of the cycle of revisions, allowing others to read and critique my work, and revising again. This process never really ends, so at some point I say I’m done changing it (until I decide to revise again).

This is the end of my work on it. At this point, either it gets shoved into a word processor deep down on my hard drive or it moves to the next step in publishing. This could be anything from sharing it online, such as with Wattpad, to beginning the query process.

And then it is out of my hands.

Now that I’ve shared my process, I’m curious to know yours. Do you do any of these things the same way? Do you keep a dedicated project notebook or Word file for every new story? Tell me about your process in the comments. Let’s talk writing!

2 thoughts on “From Spark to Story: My Writing Process”