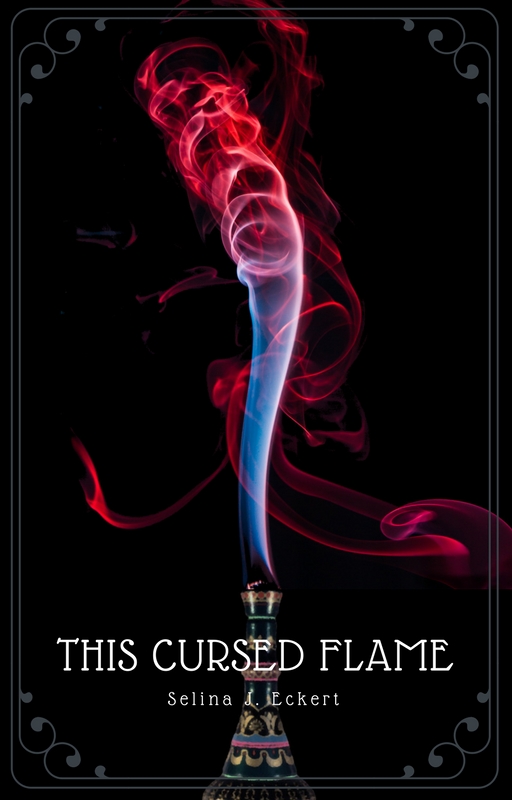 This Cursed Flame began with a love of sitcoms, specifically that old classic I Dream of Jeannie. I loved that show growing up, loved that there was an astronaut and a genie and the silly antics and the unique feel of the show. And I still love it, though as an adult I can certainly see how the times influenced the portrayal of Jeannie and her role (but that’s a discussion for another day). Regardless, my feelings toward the show were always fond, and it was even a comfort to me in hard times (I watch classic sitcoms when I’m upset or have a bad day, they cheer me up).

And then one day in college I had an idea. What if I wrote my own story with a genie as the main character? I stewed and simmered the idea for a while, fleshing out the character, her world, and, eventually, her story.

This Cursed Flame was born.

Originally, I called it Elemental, but as much as I loved that name, it wasn’t unique and it certainly didn’t convey what I wanted it to. No, eventually I shifted this focus. Because the elemental magic in the story isn’t simply magic, and it certainly isn’t loved by Janan.

You see, Janan, the genie protagonist in the story, never wanted to be a genie. She never wanted to have magic. She just wanted to live her life. And now that her life was stolen from her, she wants to pretend she can get her old life, and her humanity, back.

But sometimes you can’t go back. Sometimes you have to take what life gives you and work with it to move forward. Her magic is a curse, but it’s one she has to learn to use. If she can’t, the world will pay for it. If you read the story, you’ll understand why.

But enough of that. Why am I moving this story to Wattpad? I’ve been working on it since 2011, it’s gone through countless drafts and rewrites (the most recent being this summer), and I’ve even queried the story.

The truth is that this story doesn’t seem to be a good fit for the publishing world at the moment. And if you’ve ever tried to publish, you know how true those words can be. It hurts when you’re told your writing is good but it’s not right for the agent or publisher right now. But that’s part of writing. Even if you love something you wrote, it doesn’t mean others will think it’s marketable, and really that’s what it comes down to.

But I didn’t want my story to die or to sit unread on a shelf indefinitely, though I was tempted to do just that. I’m in love with this world and my characters, and I wanted it to do what I’ve always wanted it to do: speak to people. Tell them they’re not alone in their experiences. Encourage and empower people to face their demons and live their lives.

I’d been hearing about Wattpad for years, and eventually I decided this was the way to go, at least for the time being. I want my story in the world; it’s already spent six years kept to myself and only a few other people. This seems like exactly what I want for this story at this time. And who knows, I may come back to publishing this in the future. But until then, I’m not going to hide my work.

If you’re interested, you can read This Cursed Flame on Wattpad for free here. I will be publishing one or two chapters every Friday until the entire story is uploaded. I hope you’ll take the journey with me.