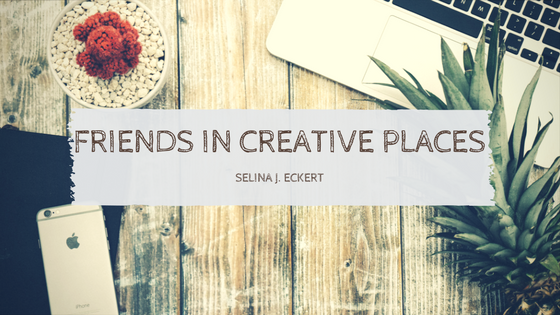 A while back you may recall my post titled “The Demons of Discouragement.” Well, after reviewing that post recently, I realized that the discouragement I was feeling has been somewhat alleviated. So I started thinking about why that might be, and I have come to a conclusion: I found the right creative friend. This isn’t to say my other support hasn’t been phenomenal, and I love my friends and family for their support every day. But it’s quite different to have a creative friend doing the same work as you.

Back toward the end of summer I had joined a local writing group that met in the Barnes & Noble closest to where I lived (I still attend every meeting!). About the same time I started going, another woman near my age also began attending. Like me, she had written a book. Like me, it was fantasy. Like me, she was ready to query. Unlike me, she was vocal about it.

So we gravitated together at and around these meetings, talking shop and gushing over our books. She began pushing me to do things I would have avoided out of my introverted, shy nature or because of the cost. With her, I attended a writing workshop in Philly in April. I went to a Sarah J. Maas book signing and discovered that she lives pretty close to me. I traded critiques and reviews of synopses and query letters and drafts.

And you know what? The query process is going so much better. I got a request for my full manuscript at the workshop. I have six queries out in the world, shining in their new and improved status. I feel more confident in what I’m doing, not like I’m just flailing in the dark and hoping to hit something.

But you know what’s even better than all that?

I’m in love with my writing again. Because of her, I’ve had professionals tell me I was talented and skilled (a huge boost for the discouraged writer!). I’ve had a passionate friend who loves fantastic worlds as much as I do. I’ve had opportunities to meet people and grow not only as a writer but also as a person.

And because of her, I’m back.

So what about you? What have you experienced or done that has fueled your creation and your passions? I’d love to hear about it!